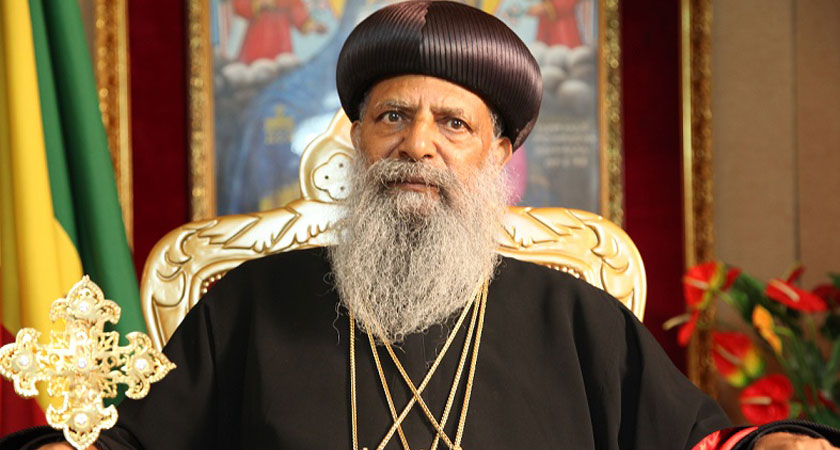 153 views
3 min read
FacebookTwitterRedditPinterestEmail
These words were meant to be part of Patriarch Mathias’s live televised address during the celebration of Meskel, the commemoration feast of the finding of the True Holy Cross of Christ, had it not been part of the text he was forced to leave out last minute following a threat from Prime Minister Abiy Ahmed’s advisor Daniel Kibret and Mayor of Addis Ababa

These words were meant to be part of Patriarch Mathias’s live televised address during the celebration of Meskel, the commemoration feast of the finding of the True Holy Cross of Christ, had it not been part of the text he was forced to leave out last minute following a threat from Prime Minister Abiy Ahmed’s advisor Daniel Kibret and Mayor of Addis Ababa.  On Sept 26, 2021 Ethiopia celebrated Meskel at Meskel Square, the country’s largest public square in the capital named after the name of the holiday in the presence of the President of the country and Mayor of Addis Ababa and other domestic and foreign dignitaries.  Sources disclosed to UMD Media that the live address by His Holiness Abune Mathias, head of the Ethiopian Orthodox Tewahedo Church televised to the whole country and the rest of the world was substantially different from the original one included in the magazine distributed in advance to the attendees. The Patriarch was forced to leave out a significant chunk of the original text that appealed to negotiation, dialogue for peace and reconciliation. This forceful pressure came, sources told us, after Daniel Kibret, advisor to PM AbiyAhmed and Mayor Adanech Abiebie, a close ally of the PM threatened Patriarch Mathias with accusing him of inciting violence in a public holiday. We have included the originals of the full text and live address (video link) and our translation of both.

It is to be recalled Daniel Kibret who is an Orthodox Church deacon received condemnation from the US government recently for his ‘the last of their kind’ and ‘weed’ rhetoric referring to Tigray Forces, their affiliates and likes.

Patriarch Mathias months ago speaking about #TigrayGenocide and his being silenced from speaking up said in a video recording “Unfortunately, all my messages have been banned and prevented. As a result, all my efforts came to nothing. This is because I am not allowed to speak. I spoke out and they held it back. I spoke out again and they held it back. Until now I have not had the opportunity to display my message through the media”.

UMD Media sources closer to the PM Office disclosed that Daniel Kibret has been the key figure in silencing the Patriarch over the past 11 months using his position in the PMO and board member of the state press agency and his connection within the orthodox church.

Following international medias’ report on his video recording in May, Daniel Kibret and Ethiopia’s Chief Spy Temesgen Tiruneh, a long time ally of AbiyAhmed went to the Patriarchate Office to press Patriarch Mathias to come over on State Media to retract his video recorded message which the Patriarch refused.  According to same sources, Daniel Kibret has during the last May meeting of the full Synod of the Church made an effort of mobilizing some elements in the Synod for the Patriarch’s removal from office which some say is an effort far from over. The next meeting of the full Synod is in October. People we spoke to in connection with the Meskel Square address of Patriarch Mathias who requested to remain anonymous for fear of repercussions said this significant censorship of the Patriarch’s speech happening in an important public holiday inscribed in the UNESCO Representative List of the Intangible Cultural Heritage of Humanity in 2013 should be taken seriously by the international community.

Conversation with Yosief Gebrehiwet on the West’s Response to #TigrayGenocide